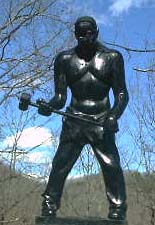 John Henry was born föddes  a slave slav  in the 1840's.
(After the war he was freed befriad.)

He was born with a hammer hammare  in his hand!

“What’s that rascal busunge  up to now?” his mother chuckled småskrattade.

Before she knew it, he was grown up var uppväxt. He could help her around the house.

As he grew up, he did a man’s work helping his father. One day John Henry thought, “I’m taller and stronger than anyone around. It’s time I go out into the world.”

He went to work for the C & O Railroad järnvägen. He was a "hammer man," don't you know. John Henry was the strongest, the most powerful man working the rails järnvägsräls.

John Henry, he would spend his days hitting thick steel spikes grova spik  into big rocks. No one who could match him. Though many did try.

Well, the new railroad was moving along right quick, thanks to the mighty John Henry and others. But right smack in its path (mitt i vägen)  was a mighty enemy fiende - the Big Bend Mountain berg.

Now the big bosses at the railroad decided that they couldn't go around the mile and a quarter ¼   thick mountain berg. No sir, the men of were going to go through it. Drilling  borrande  right into the heart of the mountain.

A thousand men would lose their lives before the great enemy was conquered besegrat. It took three long years. Before it was done the ground outside the mountain was filled with makeshift hoprafsad, sandy graves graver (begravningsplatser).

The new tunnels were filled with smoke and dust damm. You couldn't see at all. You could hardly breathe nästan inte andas. But John Henry, he worked tirelessly. He drilled with a 14-pound hammer. He went 10 to 12 feet in one workday. No one else could match him.

One day a salesman came to the camp. He had a steam-powered drill. He claimed påstod  it could out-drill any man. Well, they set up a contest then and there between John Henry and that drill.

The foreman ran that newfangled nymodig  steam-drill ångborr. John Henry, he just pulled out two 20-pound hammers, one in each hand.

They drilled and drilled, dust rising everywhere. The men were howling and cheering. But then all at once, the machine shook and stopped. Men worked to get it going again. But they couldn’t.

John Henry held up his hammers in triumph segerglädje! The men shouted and cheered. The noise was loud  hög. So loud that it took a moment  stund  for the men to realize fatta: John Henry was tottering håll på att vackla.

Exhausted väldig trött, the mighty man crashed to the ground. The hammers rolled from his grasp  grepp. The crowd went silent tyst. The foreman förman  rushed to his side. But it was too late. A blood vessel  blodkärl   had burst sprängs  in his brain  hjärna. The greatest hammer-man on the railroad was dead. 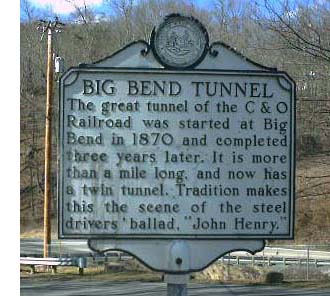 Some folks say that John Henry's likeness (nåt som liknar honom)  is carved  uthuggen  right into the rock inside the Big Bend Tunnel. And if you walk to the edge of the blackness of the tunnel, sometimes you can hear the sound of two 20-pound hammers drilling their way to victory seger  over the machine.

John Henry: Was he born a slave or was he born free?

Legend says that he was born with something in his hand. What?

John's mother called him a "rascal". How do you say that in Swedish?

Who did John work with?

Why did John leave home?

At first, he worked somewhere. Where?

What was the name of the railroad?

What work did he do?

Was John as good as anyone elsethere?

What was in the way?

They came to a mountain. Did they go over it or through it?

Was the work safe?

How long did it take?

Why were there so many graves?

It was hard to breathe in the tunnels. Why?

The hammer was heavy. How heavy?

What did the salesman bring?

He said that the machine could do something. What?

The machine shook and stopped. Then what happened?

Who won? Man or machine?

Why was the crowd silent?

Why was it too late?

"Svärta" is a Swedish word. What do you say in English?

John Henry had a little baby.
You could hold him in the palm of your hand.
The last words I heard that poor boy say,
"My daddy was steel-driving man Lord, Lord.
My daddy was a steel-driving."